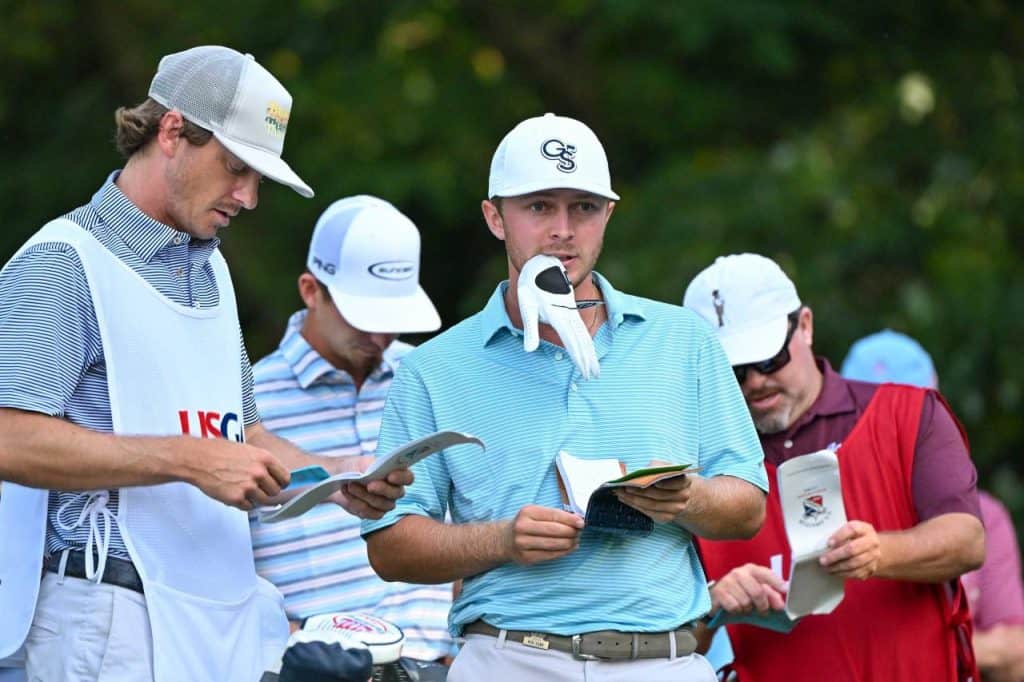 In just his second US Amateur appearance, Georgia Southern 5th year senior Ben Carr made it all the way to the finals before ultimately falling to Texas A&M’s Sam Bennett. It was a stellar performance from the worlds 53rd ranked amateur, but it was his caddie and former PGA Tour pro Willy Wilcox who he credited with coming through at clutch times and helping him stay focused and ready.

In his quarterfinal matchup against Alex Price, Carr relied on Wilcox to help reset and stave off a furious comeback from the up and coming Price.

“I was pretty nervous, I’m not going to lie,” Carr said. “The crowds got pretty big, and I haven’t played in front of a lot of big crowds.

“That’s when I started to feel it a little bit,” he added. “I thought before that I was in really good control.”

“I asked Will ‘I need you to help me reset,’” Carr said. “And he just told me you’re still in a really good spot. If you were to be told before the match if you were 2 up with four to play, would you take it? And I said yes, and sure enough I gave him [Price] that hole too.”

Price did find the green at the par-3 15th to apply some pressure, and Carr’s tee shot came up short right in a greenside bunker. He then failed to get it on to the green with his second, chipping his third on and leaving himself with eight feet for bogey. Price poured in his birdie putt to earn the win and cut Carr’s lead to 1 up. Enter Willy, again.

“Willy says the same thing on 16 tee,” said Carr. “And I finally started to hit some good golf shots.”

Carr proceeded to launch a high fade down the left side of the 16th fairway, then halved the hole with a par. At the par-5 17th, where a number of matches have been decided this week, he hit another mammoth tee shot down the left side that left him with a prime opportunity to reach the green in two. Price, who found the rough from the tee, had to lay up and found the rough again. Carr ripped a hybrid that came up two paces short of the green, where he cozied up his eagle putt to five feet and he went on to win the hole, and the match, with a conceded birdie.

“To hit that hybrid into 17, and then the touch on that putt, it’s going to help me sleep a little better tonight,” Carr said.

Wilcox, who gained some infamy after coming out about his struggles with drug addiction while being a card carrying member of the PGA Tour, became a key addition to our ImpACTIVE lineup shortly before making his looper debut. He encompasses everything that our brand is about; preventing otherwise avoidable addiction and substance abuse problems by educating athletes, and making them aware of the alternatives that are readily available.

Look for the Wilcox/Carr duo to continue to turn heads in the future after earning a spot in the 2023 Masters, US Open.